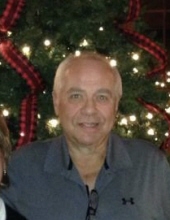 Howard Wilbert Illig, 68, of Weirton, went to be with the Lord on Friday, January 26, 2018 at his home. He was born February 11, 1949 in Steubenville, OH, a son of the late Howard Edward and Susanna Pronchik Illig. Howard taught Math at the former Edgewood School where he also served as the basketball coach and for 34 years, he taught WV History at Follansbee Middle School where he also was the intermural and wrestling coach. After his retirement, and being an avid golfer, he worked for 15 years at Red Oaks Golf Course in Bloomingdale, OH. Howard was Christian by faith and attended Trinity Lutheran Church in Weirton as well as the First Baptist Church in Weirton. Howard is survived by his wife of 44 years Diana Duffield Illig of Weirton; daughter Brenda (Kamie) Illig-Garczynski of Chicopee, MA; brother George (Cindi) Illig of Hillsboro, OH; sister Patty (James) Ruggiero of Steubenville, OH; sister in laws Shelda (Ron) Thorburn of Philadelphia, PA and Cathy (Michael) Chestnut of Roatan, Honduras and brother in law Larry (Debbie) Duffield of Charleston, WV. Visitation will be held Wednesday 6-8 p.m. at the Greco-Hertnick Funeral Home, 3219 Main Street, Weirton, where funeral services will be celebrated 11 a.m. Thursday. The Pastor Larry Barkley will officiate. Burial will be held at the convenience of his family. Memorial donations may be made to the American Heart Association, 444 Liberty Avenue, Suite 1300, Pittsburgh, PA 15222. Share tributes and memories at www.grecohertnick.com 304-748-3219.
View current weather.