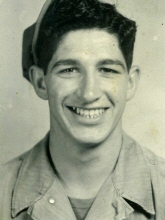 Oval A. "Curly" Tennant, 89, of Weirton passed away Friday, August 19, 2016, with his wife by his side, at the Weirton Geriatric Center. Born April 21, 1927 in Jake's Run, WV, he was the son of the late James F. and Lavine Mae (Wright) Tennant. He was also preceded in death by his infant son David A. Tennant, daughter Kimberly S. (Tennant) Marsh and sisters Marcella Myers and Mary Jones. Mr. Tennant retired from Cove Valley Lumber as a truck driver. Previous to that, he worked at Weirton Steel for nine years. He served in the United States Army and Navy. He was a former member of Kings Creek Union Chapel where he and his wife sang in the choir. He had a very pleasant demeanor and was always smiling and laughing. He enjoyed lifting weights and keeping a smile on everyone's face. Oval is survived by his wife of 69 years Geraldine (Henline) Tennant; granddaughters Carrie, Keanna and Morgan Tennant of Idaho, two great-granddaughters and nieces and nephews. There will be no visitation and private funeral services will be held by the family. Mr. Tennant will be buried at Highland Hills Memorial Gardens, Follansbee. Funeral Home: Greco Hertnick Funeral Home 3219 Main Street Weirton, WV US 26062
View current weather.