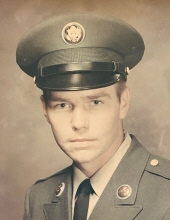 Thomas Michael Rodgers, of Weirton, passed away Sunday, November 15, 2020, at his residence with his family at his side; he was 70 years old. Born in Steubenville, OH., December 20, 1949, a son of the late John Joseph and Mary Lou Diegmiller Rodgers, he was also preceded in death by his son Kelly Rodgers, brother John (Dan) Rodgers, and sister Patti Jo Hixenbaugh. Thomas worked for the former Weirton Steel Corporation, respectfully holding the job as a Rigger for more than thirty years. He was a graduate of Madonna High School in 1968, enlisting later that same year with the United States Army. His son Casey always remembered his father being very proud of his time served in Vietnam with the Air Cavalry. Thomas was an outdoorsman at heart. If he wasn’t watching his favorite westerns with John Wayne, you could probably find him in the woods during deer season. A quiet man who loved to garden and share what he raised will forever be known as a hard worker who loved his children. His family who is left to cherish his memory are his sons Casey Rodgers of Weirton, Keefe Rodgers of Clarksburg, WV., daughter Colleen (Jeffrey) Bake of New Alexandria, OH., brother David (Jeannie) Rodgers of Burgettstown, PA., sisters Barbara (Charles) Kemp of Burgettstown, PA., Donna Wasik of Joffre, PA., Mary Ann (Daniel) Haspel of Weirton, brother-in-law, Michael Hixenbaugh, granddaughter Mina Bake, and many nieces and nephews. Friends and family will be received Wednesday, November 18, 2020, from 5-7 pm at the Greco-Hertnick Funeral Home, 3219 Main Street, Weirton, WV. Military honors will be provided by The West Virginia National Guard and American Legion Post 10. All in attendance are encouraged to wear a face covering and practice social distancing. Share tributes and memories at www.grecohertnick.com 304-748-3219.
View current weather.